Boyfriend and I went to Harbin, way up in the far reaches of northeastern China, for the Dragon Boat Festival long weekend. The city of 10 million is known for its bitterly cold winters (-40 degrees!), during which it holds an ice sculpture festival with giant icy monuments dotting the city. For those brave enough to go during this time, it’s supposed to be a fantastic sight. I, however, am not brave enough, so I went during the middle of summer. I hoped it would offer a somewhat cooler respite from Beijing, but it was blazing hot.

Still, the weather was nice, and we could explore the city at at our leisure. Harbin was mostly built up by the Russians at the turn of the last century, and many European-style buildings still stand. If you don’t mind crowds, then a stroll down Central Street (中央大街) can be quite nice. The cobblestone pedestrian street was once the city’s main thoroughfare, and it still carries an air of grandeur, a boast about its past. The Russian influence remains strong: Everywhere, there were street-side stalls advertising “面包” (mian bao, or bread) and stores selling imported Russian goods and trinkets. There is a park named after Stalin (great for a walk along the Songhua River, above) and a street named after Gogol. And of course there is the largest Orthodox church in East Asia, Saint Sophia Cathedral, which has become an icon of Harbin. 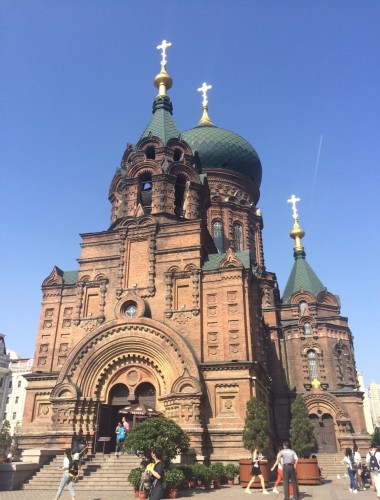 There were also plenty of Russian restaurants, and we even tried one for dinner one night. I can’t vouch for its authenticity, but the decor made it seem like we were stepping back in time to the days of imperial Russian glory.

A trip to Harbin may or may not include the Siberian Tiger Park (黑龙江东北虎林园), a tiger farm with Siberian tigers, regular tigers and other big cats. It is a morally dubious venture that provides very depraved entertainment, so visitors should seriously consider whether to go or not. There are plenty of tigers, and the ones we saw appeared to be well-fed and fairly healthy (though just as miserable as any caged wild animal). Some of them got to roam about freely in large chain-linked enclosures, through which you’ll get driven in a caged bus; for some extra kuai, you can feed the tigers raw meat or even live farm animals. Park staff really tried to get us to feed the tigers as well, though only one family took the bait (ha ha). For 100 kuai ($15), five large chunks of raw beef were sort of tossed onto the floor of the bus in front of them, and then our tour guide demonstrated how to use tongs to hold the beef up through the wires of the cage until a tiger jumped onto the side of the bus to retrieve it. Her exact words were: “Taunt it first” — apparently, hold the meat near the floor of the bus to attract the tigers; then when they try to eat it, raise it up higher so that they too climb up the bus higher — “so that you can take better pictures!” Such is the state of animal welfare in China. 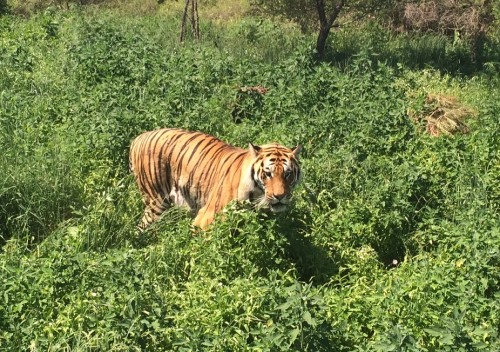 Some other tigers were in smaller enclosures with unfilled pools that seemed to have become their litter box. The floor of these pens was just hard, packed sandy dirt, which I can’t imagine was good for the kitties’ paws :( In even smaller — too small — individual cages were the jaguar, cougar, liger and other cats. Visitors could again pay to feed these cats various types of meat, and one middle-aged man bought a chicken. He chucked it into the largest tiger pen through a metal chute. It stood frozen on the ground for a moment, unsure of what was happening, as a few tigers crept slowly — almost as if disinterested or unsure — toward it. By the time the chicken got a clue, though, the tigers had pounced. We heard a frantic cluck, a wild flapping of wings, a deep roar. The next thing we knew, the chicken was no more, just a tuft of feathers laying on the ground where it once stood. The triumphant tiger held the bird in its mouth, while the other tigers silently retreated back to the shade. 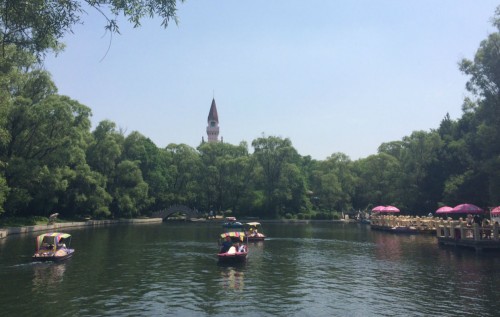 On a brighter note, we also went to the Botanical Gardens (黑龙江森林植物园), which was lovely. Plenty of families were out that day and had set up tents and picnic blankets. It’s a huge park divided into various sections, with lots of small shaded paths to wander down. My favorite part was the vegetable garden, I’m not sure why, but probably because I like to eat, so it was easier to identify with the plants. There was also a medicinal plant garden and a replica of some sort of prairie land, complete with fake giraffes and herons. After exploring most of the park, we went paddle boating around a very small pond. I’m not sure why we don’t go paddle boating more often.