Harbin is quite an unusual city. For starters, its name in Chinese is three characters, deriving from a Manchu word. And its history as a Russian base has left an indelible European imprint on the city. But other than the unusual architecture and the local’s apparent love for ice cream popsicles, it really did seem like any other second-tier Chinese city.

However, as we wandered around, I began to notice something strange. Everywhere I went, there were the shops of famous brands, identifiers of the Chinese middle class: Adidas, H&M, Sephora, Uniqlo, Zara, KFC, McDonald’s, Starbucks, Pizza Hut. There were shops of well-known Harbin brands as well — Churin and Modern — the latter of which always had throngs of people grabbing a quick ice cream popsicle. But then I saw a weird sign (which I didn’t take a picture of). It looked really similar to this sign:

Except instead of IT’S, it said “VT’S” and instead of TIME, it said “TIEM”. If I recall correctly, the Chinese characters 时间 (shi jian) had been switched to “时光” (shi guang). The store with the logo above is a popular Beijing-based chain found throughout the country that sells fruit-based drinks. I thought the obvious knock-off was quite amusing at first, but didn’t think too much of it. Until I saw another store: 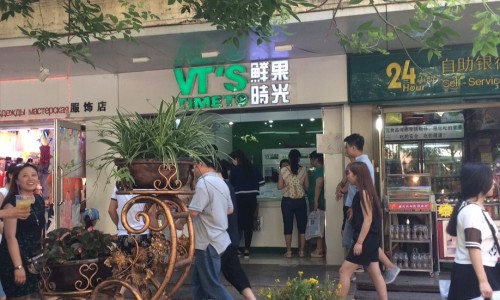 As you can see, this shop — which turned out to be one of many around Harbin — spells TIME correctly, but still inexplicably spells IT’S “VT’S”. They sell the same fruity drinks from tiny window shops along the sidewalk. They even have a website that looks almost identical to the real/original shop.

Now the Chinese are famous for their copying skills, and the country is a veritable mega-store of fake, cheap knock-off goods. Western media have run countless articles on Chinese knock-offs of Western brands, and overseas tourists have posted their own discoveries during their trips to China. While imitation is the sincerest form of flattery and people everywhere copy each other all the time, I think what shocks people most when they come to China is how blatant the copying is.

I actually didn’t see any Western store knock-offs in Harbin (or their cousin, the fake Western brand stores), but I did come across some fake Ben & Jerry’s ice cream in a Chinese bakery. It even came in its own branded freezer cooler:

Meanwhile, back on the street, I saw my favorite dessert shop, Honeymoon Dessert (满记甜品), blatantly being copied. But instead of conjuring up something sweet and romantic like its original, this shop chose a twist on the name that invokes rather the opposite feeling: 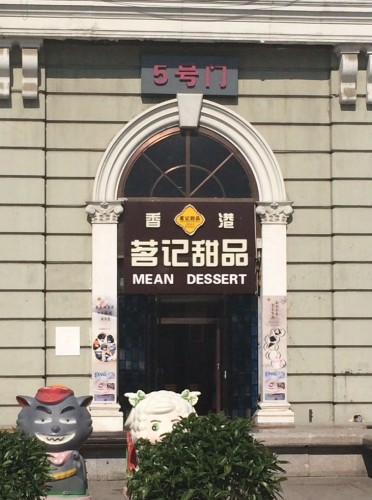 And then I saw another knockoff! This time, it was on a billboard of food operations in the shopping mall next to our hotel. What caught my eye was a picture of a dessert that looked rather similar to one offered at Honeymoon Dessert, but the name next to it was “Henki Dessert” (恒记甜品). I spotted the actual shop at the very bottom of the pit of the mall next to the escalators, and Boyfriend and I decided to try it for our last meal in Harbin: 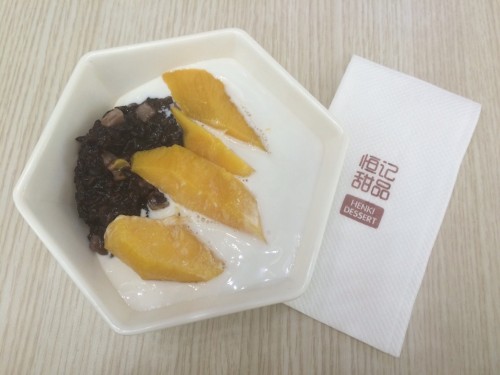 I ordered my usual mango and black sticky rice in coconut milk dessert (which was not as cutely named). It was fine; not as good as Honeymoon Dessert’s, but it didn’t taste terrible.

Anyway, these knock-offs were not something I expected to see — Ben and Jerry’s is hardly well-known in China, while the other two stores are extremely popular among young Chinese. Is it a sign of the country’s development if the Chinese are copying their own brands now? It seems that Chinese brands are successful and reputable enough that they are now worth being copied. They are not always happy about it, either: The drink shop above has a notice on their website to alert people of fraudsters. I wonder if, as more Chinese companies are copied, the Chinese will start to care about intellectual property rights.