After spending a total of two days last year in countries I’d never been to before, I’m happy to say that I’ve been traveling a lot more this year. So far I’ve knocked out three more countries — and it’s only June! Here’s a round-up of my adventures in Cambodia, Thailand and Indonesia: 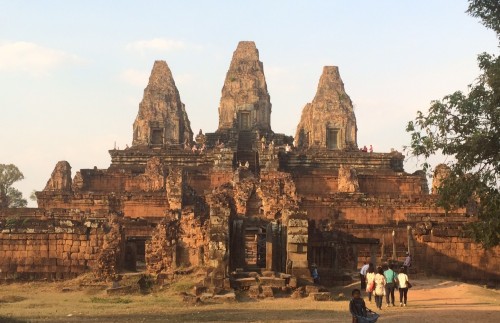 I had to go on a visa run at the beginning of the year, so I was looking for somewhere interesting to spend a weekend when I saw that Malaysia Airlines was offering ridiculously cheap flights to Siem Reap. I ended up booking myself and Boyfriend a four-day trip to the city — just enough time to take in the Angkor temples, do a cooking class and buy elephant pants for everyone back home. 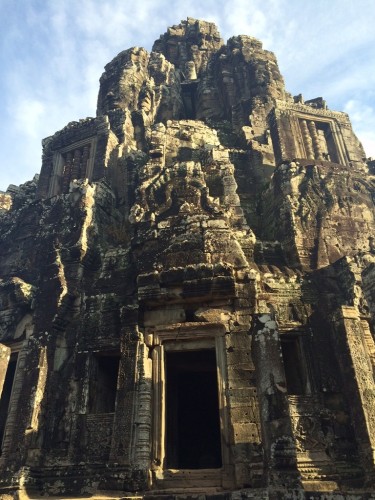 At that point, our Southeast Asia experience was limited to the Philippines, and we went with no expectations. But even if we had had some, Siem Reap would not have disappointed. The main part of the city is just a few blocks, easily explorable by foot within a few hours, with all the trappings a tourist could want: markets, local handicraft shops, bars, restaurants and ice cream. I was so happy to find affordable ice cream!

We really enjoyed the food as well — sort of a blend of what I like most about Vietnamese and Thai cuisines: fresh, perfectly balanced between sour, sweet and salty, and generous with flavorings without them being too overpowering. But perhaps the highlight of the trip was my daily coconut, which I would buy at a street-side stand down the road from our hotel for 3,000 riels (75 cents!) and then later get one of the nice hotel staff to hack it open for me. Man, if only I could have a coconut every day…it really made me look forward to Thailand. 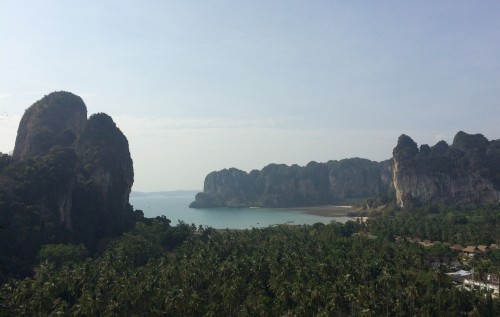 We’ve lived in China for five years and still had not gone to Thailand. It’s one of those places that I just assumed I would go to at some point because everyone has, but I never made it a priority for the same reason. I finally decided to get it over with for our Spring Festival trip as apparently it was high up on Boyfriend’s list. 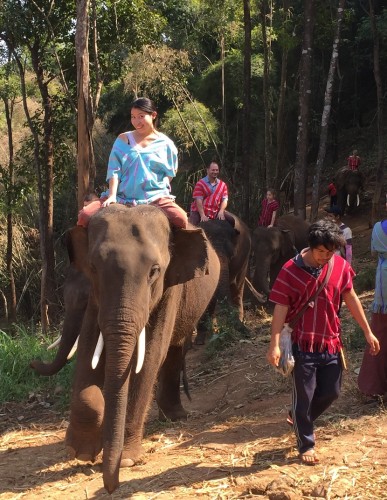 With two weeks to spend there, we figured we could comfortably split our time between a few places: Bangkok (because you can’t understand Thailand without experiencing Bangkok), Chiang Mai (because Thailand is more than Bangkok, it is also Chiang Mai), and a beach (because Thailand = beach). But with so many choices and so little knowledge of the country, it was hard to decide which beach to go to. We ended up choosing Railay, a small peninsula off Krabi, because it was closer to Chiang Mai and Bangkok, easy to get to but still remote (at least relative to Phuket, Krabi and Koh Lanta and Phi Phi).

It turned out to be a good mix of sights for an introductory course to Thailand, as well as just the right amount of time for a little bit of both adventuring and relaxing. We climbed waterfalls, went snorkeling and, most importantly, hung out with elephants! We also got a bit of food poisoning in the middle of our trip, so we were forced to take it pretty easy for the last half. Our impression of Bangkok may have suffered a bit as a result, but I would say we had a surprisingly enjoyable time at the Snake Farm and Lumphini Park (both Boyfriend’s suggestions). Go to the Snake Farm during the afternoon (or before lunch on the weekends), when they have the snake handling show, and Lumphini Park after sunset, when Bangkok-ians go for a workout.

At the beginning of the May, I spent just over a week in Bali with my sister. We had talked about going last year because there was some yoga retreat my sister was interested in, but the timing ended up not working out for us. I can’t remember why we decided to go this time around, though, other than I had to go somewhere for my visa run and we had this idea last year. 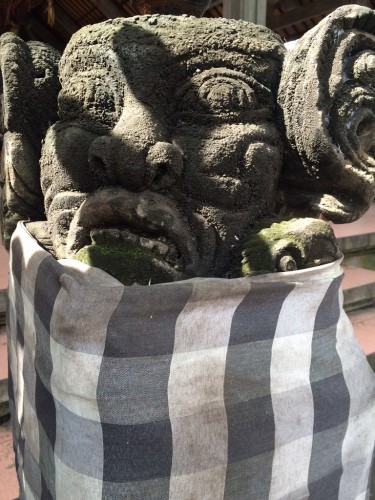 So off we went to discover this magical island, and everything people say about Bali’s natural beauty is true. The endless fields of rice, Lake Batur nestled between the two mighty volcanic peaks, open-air temples around every corner, and the blue ocean waters stretching as far as the eyes can see.

The Balinese were also the nicest and most welcoming locals I’ve ever met, despite all the tourists. The tourism industry in Bali is definitely well-developed, as everything we did was the result of tourists: We hiked, biked, snorkeled, cooked, and prayed. But most of all we got massaged. We got four hour-long massages in the eight days we were there. Twice we got body scrubbed. I am not ashamed. My only lament is the strong divide between tourist Bali and real Bali, but I like to think that I was able to get glimpses of the latter at least.

So now that I’m so well-versed in Southeast Asia, you may be wondering if I have any advice for the trip you are now thinking about taking there. Fret not, I am here to answer your questions:

Where should I go if I can only choose one country? Well, Cambodia, Thailand and Indonesia are all great places with similar cultures, so you would get the Southeast Asia vibe at any of them. But they are still very different from each other. Bali is the most upscale — luxury resorts and private drivers abound — but it may also be the most enigmatic. Thailand is the most versatile and has something for everyone — families, couples, friends, lone backpackers. Cambodia is less well-traveled but still excels at that Southeast Asian hospitality, so it’s perfect if you want a relaxing, yet still adventurous vacation without breaking the bank.

OK, but what do I definitely need to check out? OK, well, if I had to choose my most favorite activity, it would be hanging out with the elephants in Chiang Mai. We looked for a responsible business focused on elephant rescue and rehabilitation and found Patara Elephant Farm. It is expensive, especially for Thailand (it was actually the most expensive expense of our whole trip), but the money is well worth it. That’s not to say you should base your trip plans solely around elephants, though. The Angkor temples are simply amazing, while Bali is perfect for a retreat to recharge.

You’re just recommending every country. Yep, they are all great and worth checking out. You’ll have a great time wherever you go.

Chiang Mai or Ubud? Wow, this is a tough one. Both are charming little cities with strong identities and great opportunities for excursions. Chiang Mai is more compact and thus more easily explored. Ubud is so calm and serene. Chiang Mai has the tastiest coconuts of anywhere I’ve had coconuts. Ubud has nicer temples. It’s a toss-up.

Railay or Nusa Dua? Railay, no contest. Railay is pretty much what you imagine when you think of “perfect tropical beach getaway.” The water is warm and clear, the beach is clean, the sand is soft and white, and the limestone cliffs make for amazing surroundings. The only downside is that it is crawling with tourists and has zero local culture. On the other hand, Nusa Dua is also crawling with tourists and has zero local culture, but its beaches are way overrated. You can’t just walk around and feel like you’re at “the beach” — it is too big — and the beaches themselves are less than ideal. The waves are quite strong on beaches that were described to us as “calm” and “good for swimming,” and the water is littered with trash. I would probably try the northern or eastern beaches if I go back to Bali (right now my opinion is based only on Geger Beach, as well as Sanur and Dream Beach in Lembongan). That being said, if you’re looking to surf, Bali has better waves, while the snorkeling/diving near Railay and Nusa Dua are pretty similar (though the best snorkeling/diving in Thailand or Bali is elsewhere). Railay also has rock climbing, if that’s what you’re into.

Siem Reap or Bangkok? This one isn’t a very fair comparison, as Bangkok is a giant, international city, while Siem Reap is just a town with a very famous attraction.

Le Tigre de Papier or Pemulan Bali? If you love to cook, any cooking class in Southeast Asia would be worth your while, but I’d have to highly recommend Pemulan Bali. As I said, the Balinese in general are really nice people, but the staff of Pemulan Bali were truly kind and sweet. Plus, the class takes place on their organic farm, where you get to pick the vegetables you cook with. I would say it’s worth going to Bali just to take this cooking course, but that would be silly. However, if you do go to Bali, you should definitely sign up for this cooking course.

Is there anything I should look out for, besides the usual tourist tips? These countries are still developing, and unfortunately the tourism industry is both a blessing and a curse for them. Tourists undoubtedly bring significant monetary advantages that many people otherwise never would have had the opportunity to obtain. At the same time, tourists use up a ton of local resources, leaving behind both environmental and cultural degradation. To counter the latter, these countries have developed a sanitized, stereotyped version of themselves to sell to tourists, so it may be hard to get a “real” look at them if you’ll be there for only a couple of weeks at most (as I was). Just be kind, be courteous, and try to see beyond it if you can — it is a privilege to travel!