I haven’t been terribly creative since coming back to Beijing after the Chinese New Year holiday. My mind is overflowing with ideas, but it’s hard to have time and not feel lazy at the same time. As such, my culinary experiments haven’t been many. Still, here’s some stuff I have managed to make: 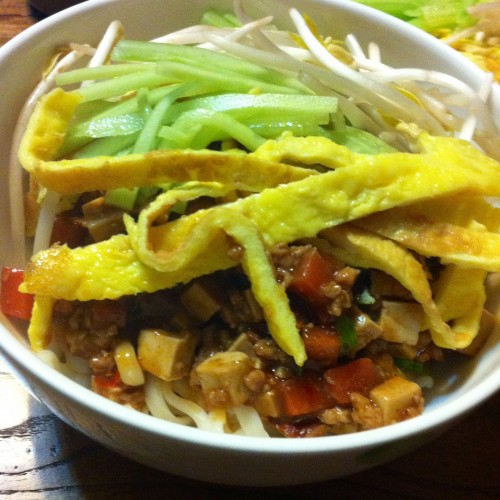 Zha jiang mian. Otherwise known as Chinese spaghetti, this noodle dish comes in a variety of regional iterations, but the zha jiang (which literally means “fried sauce”) is always some sort of bean paste mixed with a little bit of meat. It can be accompanied with fresh vegetables, such as cucumbers, beans and bean sprouts, as well as eggs. It is one of my favorite dishes ever, and my father makes a mean Taiwanese version where he stir-fries ground pork, dry tofu and carrots with tianmian jiang (甜面酱) and douban jiang (豆瓣酱). I tried to copy his recipe here: It ended up far from perfect because I added too much douban jiang, and then I couldn’t add more water to compensate because I ran out of cornstarch. But I was still very proud of my first try! 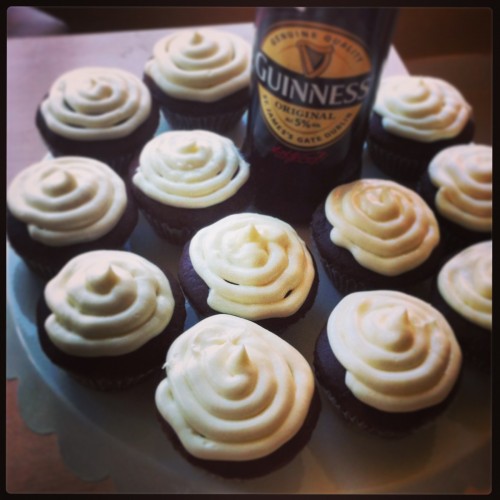 Guinness cupcakes. My sister gave me a cute little cake stand for Christmas, and so I’ve been dying to make a cake. I just couldn’t decide what kind of cake to make! Then St. Patrick’s Day came along. I don’t usually celebrate the holiday, but I love Guinness and I’ve been meaning to try cooking with beer. It was a win-win situation, as the Chinese would say. 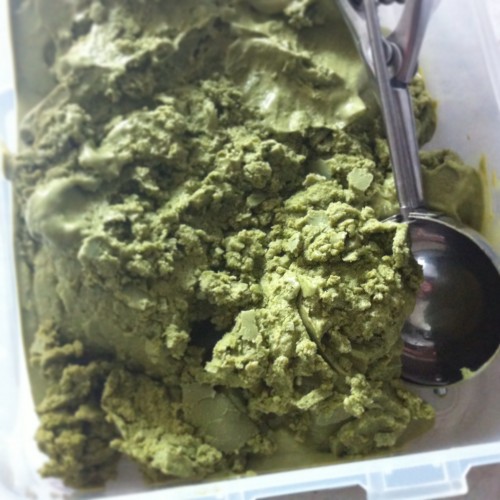 Matcha ice cream. It took me a while to get around to making this easy-peasy (ezpz) ice cream because I wanted to pair it with some hong dou tang (红豆汤, or red bean soup). Red bean soup is one of my favorite desserts (“dessert”), made from red beans that are cooked in water until they have softened and burst to make a nice, thick soup. Sugar is added so it’s sweet, and glutinous rice balls (汤圆, tang yuan) can be added for more fun. My mom made it every year when I was growing up, and that would be how I knew winter was coming. The beans would be soaked overnight before they were cooked, and while they cooked, my mom and I would make the rice balls. Last winter, I made the entire soup myself for the first time. This winter, I never got around to making it and then spring came early. But red bean soup can really be eaten any time of year (it’s delicious eaten cold in the summer), so I got out my red beans and soaked them, thinking I would whip up the ice cream mixture while they were soaking. Unfortunately, the store didn’t carry any matcha. I ended up having to order it online the next day, and it took another day to be delivered. By that time, I’d eaten half of the red bean soup, so now I have lots of ice cream and no more soup :(

One thought on “Food I can cook: Zha jiang mian, Guinness cupcakes and matcha ice cream”